Episode 148: The 2018 Recap: Lessons for Your Service-Based Business

Hello, 2019! While I’m not a big fan of new year’s resolutions, let me tell you, I’m so READY for a new year to be here. More ready than ever. In this episode, I’m doing a recap on November and December and the year that was, taking you behind-the-scenes of Scoop Studios and Small Business Boss.

Bosses. Oh, bosses. I’m doing a happy dance as we’re in a new year. 2018 was an amazing year on many, many levels. And quite frankly, it was hard. But I’m going into this new year with so much gratitude, and more importantly, perspective.

Because, yes, there were some not so good things — both personally and professionally — but I’m better off for them. Also, perspective is everything and, not going to lie, some therapy has helped me sort through it and walk away feeling empowered.

And you know why? Because this is life. And I’m here to live it.

So enough about my waxing poetic about where I’m in my head, and let’s recap what’s happened in the last few months. As we have a lot to cover, I’m going to try to hit the highlights and a few lessons.

When we left off with the October recap, we were chugging towards our goal of signing two new clients a month, and while it didn’t quite end up that way for November and December, the revenue part of it evened out with some new projects with existing clients we weren’t expecting.

And as always, we planned for a slow December — and it didn’t happen. Maybe one of these years I’ll get the memo and realize that while it may be “slow” with new business closing, it’s not slow in terms of client deliverables as everyone gets ready for the new year.

I mentioned back in October that we were hiring a new role for the team as we need more help, and while we went through that process, the new hire we made turned out not to be a fit. The lesson? You can do all the “right” things in hiring, and sometimes it’s not going to be a fit.

That’s been a bit of a setback heading into 2019, but I’m confident we’ll find the right person as this blip made Sara and I question what we really wanted from this role and how they fit into the overall team. When we give this another whirl in Q1, the role will be more specific, and we’re willing to hold out until we find the right person.

As we wrapped the year, we made some key updates to our internal processes. We went through and formatted all of our client intake and delivery documents as part of our focus on CX and systems in Q4. I know, it’s not sexy, but I gotta say, my nerdy heart is so happy that things are cohesive.

One thing that was nagging at me in 2018 was how our proposals — while awesome — needed a little more in terms of visual presentation. As a result, we’ve made the move from Bidsketch to Proposify.

I’m so happy we made the move as the proposals better match our brand and overall experience. I’m sure I’ll be sharing more, but so far, so good!

So, back in the October recap, I shared with you that the big thing for November and December was the Double It Mastermind launch.

Before we dive into that, I want to share that I previously said my goal was 16 to 22 people. Through this launch, the goal was a bit of a moving target, and part way through, I did some math and decided 16 was a solid number. But then I went and crunched the numbers again and realized that I could handle up to 20 comfortably in the mastermind based on my commitments for 2019.

The number 16 — well, that was me playing small. We’d had 16 in the past year, so I was comfortable with that number. I felt safe with that number. Having more than 16 people in the mastermind seemed a bit scary. But then I realized that with the mastermind plus private mentoring clients, I’m usually working with up to 20 people in a given month. And because that’s a huge amount of my time and energy in the business, that’s totally doable.

The key was realizing that I really wasn’t going to be in a position to take on 1:1 mentoring clients in the first half of 2019 — and maybe not at all. That freed up my mind and let me say yes to the right people who wanted to join the mastermind.

With that, I’m happy to report that we ended up with 19 people enrolled in Double It, and while I bounced around on what the “right” number was, this feels perfect! The people in this group for 2019 are amazing, and I’m excited to see what the year holds.

Everything for the launch was high touch with 1:1 calls with everyone interested, lots of time invested in answering questions and helping people from a place of honesty to figure out if this was right for them.

I love launching in this way, and it’s been a good lesson for me that a launch can be exactly what you want it to be. Plus, we wrapped the launch at the end of the early bird, and we were then able to open up a short enrolment window for the Small Business Boss Society.

Going into 2019, I feel amazing about where things are with Small Business Boss, as now it’s about serving the mastermind and Society members and reaching more people with the podcast and our other content.

So, let’s talk about what 2019 looks like for Small Business Boss.

That starts with my word of the year which is READY.

Ready as in I’m ready for what’s to come. I’ll be sharing more about that in future recaps, but let’s just say 2019 is going to rock — especially with the new things we have planned for you, the SBB community.

Speaking of words of the year, my word for 2018 was unstoppable. And that I was.

Things didn’t look the way I thought they would, and I made a lot of plans the universe had a chuckle over, but I’m proud of getting it handled.

Back in 2017, I thought I got a big old lesson about taking care of myself with my gallbladder saga, but that turned out to be the appetizer. 2018 was the main course, dessert, and coffee in the learn how to “take care of yourself” life buffet.

It’s not perfect, and I had some moments along the way that made me wonder if I was going to make it through these challenges and changes. My mental health was the main priority, and I need to work on my physical health more. So, I’ve signed up for a race weekend with friends where I have two walking races back to back. My runners are ready, and I’m hitting the treadmill.

The other big lesson, especially in business, is that it may not look like you planned. I mean, there’s no way anyone knew that by the mid-year point in 2018, I’d be back to running the business without Brittany. And while it was a bump, it’s turned out well. I feel super solid about how that let things change and evolve, and I’m excited, and most of all, READY for a new chapter.

Sappy alert coming up next. The other lesson from this year is that Small Business Boss is SO much bigger than me. I’ve talked about this before, but it’s really only been in the last six weeks that this has fully sunk in.

A year ago, I would have talked about building a community; now, I see that I’m the catalyst for being “in community,” as this is not about me. Not even close. I’m just the rallying point for these humans to connect and grow in their business journey. I realize now that’s an honor and a privilege, and I’m ready to take that on.

I’m grateful for you listening to this show week in, week out, to everyone in the Small Business Boss Squad, and members in our paid offerings, the Society and the Double It Mastermind. ALL OF IT.

Happy new year, bosses, and I’d love to hear what you have planned for 2019 over in the free Small Business Boss Facebook group, the Squad.

Links for the Show: 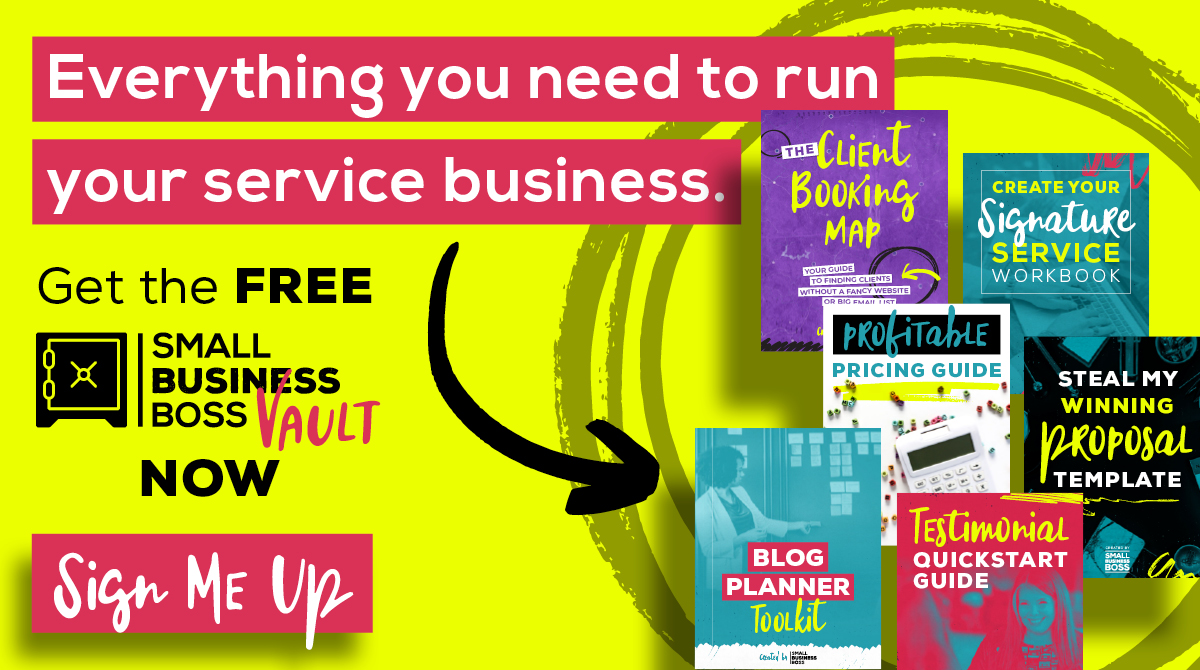