Episode 106: How to Win New Clients with Your Proposals

Proposals are THE lifeblood of any client facing business; whether you’re a freelancer, creative, or consultant, proposals are a necessary part of your business’s success. In this episode, we’re talking about all things proposals and how to win clients with your proposals — one area we know we dominate.

You know what’s awesome? When some fancy report backs up what you’ve been doing and teaching all along.

Better Proposals recently released their 2017 Report on Proposals and we both loved this report. It has great insights and, yes, while it validated a lot of what we already do, it also provided us with new things to think about — as any good report should.

We’re going to talk about our favorite statistics from this report and share our insights and thoughts.

Covers — should you use one?

From the report: Covers look amazing and visually ‘Wow’ your clients. Without them, they skip straight to the meat of the proposal. It’s no surprise they convert 44.7% better than not using a cover.

This is the first piece of evidence that design makes a huge difference to the conversion rate of your proposals.

Our take: We totally agree re: covers, and design helps for sure, but we think it’s less about a crazy design and more about a clean easy to follow flow. If you’re a designer, obviously you need to have something more designed than say a bookkeeper.

Using video in your proposals doesn’t make any real material difference to whether you win the job or not, so you could argue that it’s not worth the hassle. But any time you send a proposal, it’s a great opportunity to show what kind of company you are.

Consider that maybe, up against strong competition, a quality case study video or high production value welcome video would perform better than without.

Our take: Nice to have, but def not necessary. We do like a quick personal video after a project is won though. (Note: this runs the risk of being a make-work project.)

It turns out, if your proposal is saved/printed, then you have a 45% less chance of converting the deal. Any thoughts on why this is the case are pure theory. One would be that it’s being printed to be taken into a group meeting and being presented without you being there and that’s why the conversion rate is lower.

There’s no real way of knowing because any ability to track activity is gone the second they print/save the proposal. Our advice is to always send the web version in the first instance then let them download it if they want to.

Our take: This makes the case for using a tool vs. Google Docs all day every day for me. The ability to track is so helpful because you can tell if silence is due to some objection as they’ve viewed the proposal or if it got lost and wasn’t even received.

Looking across every signed proposal, the most common number of pages a signed proposal had was 6. What’s interesting is all our templates follow an 8-page structure so it’s taken a huge number of people getting 6-page proposals signed to knock 8 off top spot.

This could teach us that keeping the proposals more manageable creates more engagement, more understanding, and ultimately higher conversions.

Perhaps putting slightly more info on each page rather than splitting it up makes it look less daunting. A few suggestions here might be to not have a “testimonials” page, but instead, drip feed them throughout the proposal. Don’t put your guarantee on a separate page, but instead, put it next to your price.

How fast should you write and send your proposals?

Sending your proposals within 24 hours results in a 25.9% higher conversion rate and a 6 day time to sign compared to 10 days if you leave it just 48 hours.

Stop. Procrastinating. If you want to win more clients, you’ve gotta make writing your proposals and getting them out the door a priority. Build in time when you book a consult for 30 mins after to get it done right away.

This isn’t an ad for Better Proposals. In fact, at the time we’re recording this, we actually use Bidsketch, but what it does help illustrate is that paying for a tool is a very, very small investment for what you get from it.

I don’t think we’re exaggerating when we say that when we went from using Google Docs to using a tool, it changed our approach and also our conversion rates. It’s the best $29 we spend each month. (We don’t care what tool you use, but if you’re currently not using anything, why not commit to a tool for 90 days and see how you like it?)

Links for this show: 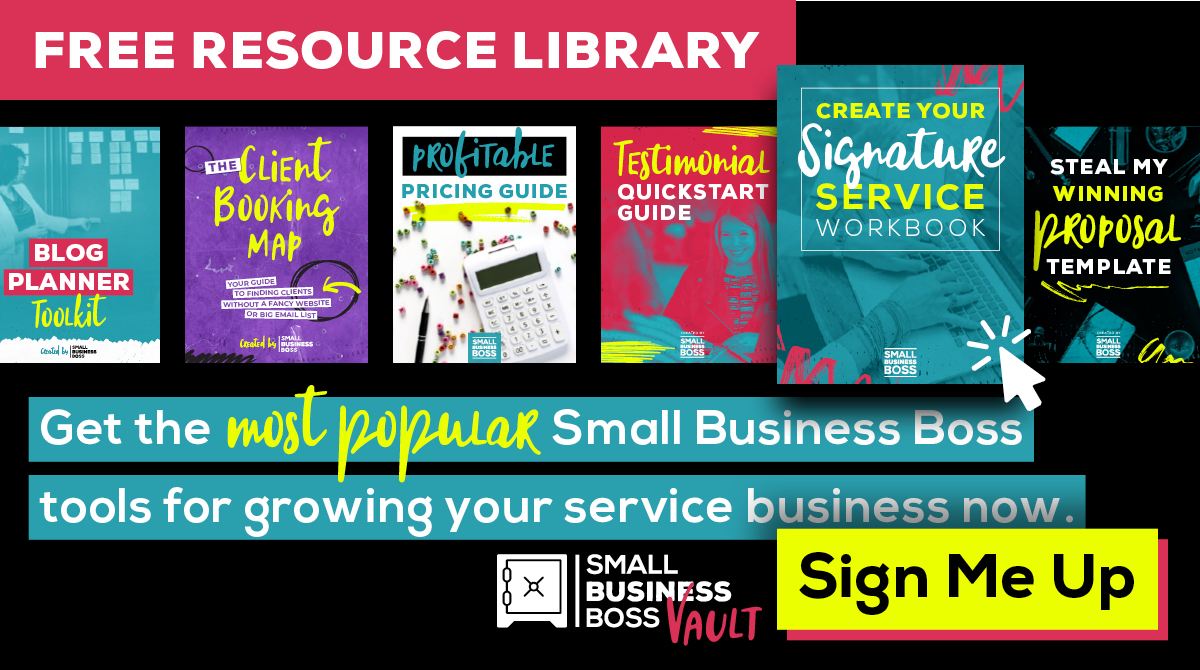